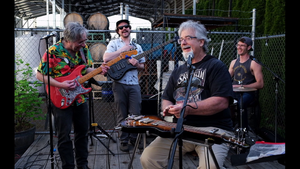 Playing in a band is similar to playing on a sports team. Each member has a particular skill. You have a practice schedule. You have gigs/games. At the gig/game, things don't always go the way they did at practice. The analogy breaks down here 'cause the success of a gig is subjective where the score of a game is not. Nonetheless, when things are going well, the band really works together. There is non-verbal communication, error-recovery, and improvisation. Teamwork is fun.

An audience can see if the band is happy or not. When the band is having a good time, the audience wants in on the fun. I'm not suggesting that anything goes, but a less skillful act having fun will get a better response than a group of uptight virtuosos.

I love winding up an audience, but it's less about ego and more about the challenge of doing it. Can you put the ball through the hoop, can you ski the black diamond, can you excite this crowd? It's about the challenge. To accomplish the goal you need a band who knows what they're doing, with players who work together as a team. I don't need to talk about treating your bandmates and your audience with respect and consideration, you should know that, but when the band is a team, and the stars are aligned, the music fills the moment and it's good to be alive.