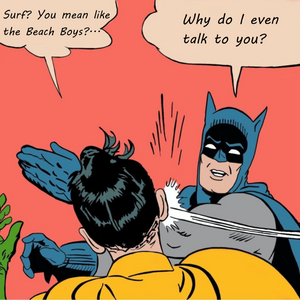 Why do we like surf? Well, for starters it's a big guitar sound, that whomping low bass and sparkling treble. The sound of surf is like a beautiful leviathan exploding from the sea. Surf evokes the power of waves and the thrill of speed. And, without lyrics, we have the music to ourselves, like a smooth beach at low tide. We write our own emotions into the song.

Surf emerged at a time of wealth and optimism. Pop culture was infused with youthful energy and curiosity. At the same time, the cold war, racial tensions and social alienation were expressed in literature, music, film and beyond. Hot-rodding, surfing, the beatnik scene blend together in a comic-book world that appeals to the adolescent in all of us.

So surf music is the center of a universe of excitement and danger. Hoodlums on Harleys and monsters from space haunting the Rendezvous Ballroom and midnight tiki-bars. Secret agents and two-headed surfers in a technicolor western at the drive in. These images may be silly, but they rekindle a sense of wonder that becomes elusive as we get older. I'm an old guy, and I walk and talk like an old guy, but when I hear surf music, I feel like a child.