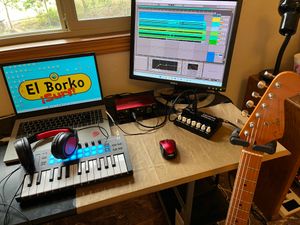 When you compose music, you might write down chord changes or lyrics. Some people actually write out a score. I do a little of each, but no matter how often I play it, I wanna hear what the finished product would sound like. Well eventually, I'll teach it to a band and record it, but I wanna hear it now. It's mostly vanity, but there are practical reasons for making a demo. You can experiment with the groove and the form and the arrangement. So... demos.

Did I mention that I love making demos? The song is new and exciting to you, and there's no pressure to make a record yet, so you can just have fun with it. I have tried many ways to demo songs, some better than others. The simplest way is to record it with your phone. If you have Garage Band you can multitrack. I must admit, Garage Band on my phone baffled me. I lacked the patience to figure it out. I also have a little Zoom camera/recorder that works well enough. One quick and dirty method is to use a looper. This can make a fairly dense recording, but it can be a chore to plug things other than a guitar or bass into the looper, and if you make a mistake you may need to start over (sigh). For a while I was making drum tracks in a teenage-engineering pocket-operator and putting them in a looper. I don't recommend it.

These days I use Ableton Live because it has midi-tracks and samples for drums, keys and other sounds. I use a Quilter Super-Block for the guitar and a midi controller for the drums. My friend has kept an extra bass at my house for years for practice but I use it a lot for recording. I use a cheap condenser mic for vocals although most of my current music is instrumental. I listen back mostly through headphones and then play the mixes through a variety of bluetooth speakers. I also copy mixes to a usb stick which I can play in my car. Driving down to the grocery store is fun when you have a new mix to listen to.

I usually play rhythm guitar to a click track and then play along to see if it sounds solid. If the rhythm is ok, I layer up guitars (sometimes vocals) and then add bass. Finally I open a midi track and start building drums. I build four or eight bar patterns for different sections of the song. I usually start with a kick and than add snare and some cymbals. when the patterns sound good I make a mix. Since it's a demo, I don't worry about fills and variatons until later, getting a good groove is more important. I don't do it all at once. I prefer to come back to it over a period of days. This gives me fresh ears and time to solve any problems with the mix, the tracks, or the song itself.

Once I have something I like, I listen to it a lot and refine it. There's one important thing though. Remember it's a demo. The final studio version may have different instruments and a different feel. When you play with other musicians, they bring their own talents to the mix. Trust your players and they usually make your music sound better. And of course, long after you've recorded the song for real, and perform it regularly with your band you will run across your demo among your stuff. It's fun to hear what your original idea was compared to the mature song. It's always fun. I love making demos.