Exile on Vain St. Part I 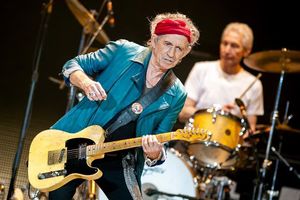 I like the early Rolling Stones, they were rowdy and innovative, but the Mick Taylor period is my favorite. I was a teen, discovering music and girls, and guitar just as the Stones were maturing into a great band. Time passes and people change. I still enjoyed the old stuff, but their new stuff contained less and less good stuff. After the album Some Girls, I lost all interest. The Rolling Stones had became a bloated, nostalgia-farting, cash-cow. Mick Jagger tried going solo and discovered he was more like David Cassidy than David Bowie. As the rest of the band died or faded from the scene, only Keef and Charlie kept their integrity, then Charlie died. I wouldn't say the band died with him though, they've been dead for 30 years.

This year is the 50th anniversary of the album, Exile On Main Street. Anniversaries are opportunities for big profit so everyone will pretend this was a fantastic album but I disagree. It's not bad, but it's not great. Compare it to other albums that were slagged by critics but sold well; Abbey Road, Led Zeppelin II, Dark Side Of The Moon, Bad, Nevermind? Not even close. I think Sticky Fingers was probably the Rolling Stones' peak. By the time they recorded Exile On Main Street, they were hanging out in Villa Nellcôte drunk and shooting smack. It's remarkable they could make an album at all. A lesser band couldn't have done it. The recording was chaotic and uneven, but they had the money and connections to hire capable people to turn this raw material into an album. The results came out surprisingly well, but there's not enough good material for a double album.

Exile On Main Street is overrated because a few excellent tracks shine through a lot of hopeless bilge. You might be angry that I don't share your enthusiasm, even though I like, even love, some of the songs. Here's an idea, why not imagine Exile On Main Street cut down to just one LP, maybe then it might actually be a great album. Which songs would you toss? Which songs would you keep?

Suggestion for the technically nerdy: A vinyl record can only hold about 22 minutes of music per side without significant loss of sound quality. If you really wanna get into this exercise, make your choices fit into 44 minutes. Godspeed.