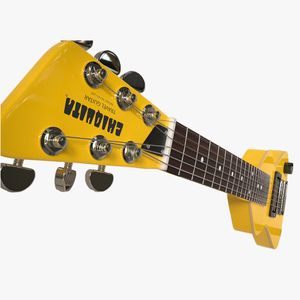 Looking for a cheap travel guitar in Guadalajara, I discovered what they called a requinto. Who wouldn't love a tiny classical guitar tuned up high like a ukulele? Mine was a "Tres Pinos" brand, and I carried it around in the giant yellow plastic bag it came in for the next decade. It wasn't very loud and there were intonation problems but it was nice to have while waiting for busses, trains and planes.

In Latin music, a requinto is usually a higher pitched version of some other instrument. There are requinto drums and horns and of course, guitars. I saw one in Oaxaca whose frets were nylon strings wrapped around the neck. The musician adjusted his intonation by moving the nylon "fret" and then heating it with a cigarette lighter to tighten it back up.

When I learned ukulele, I had an epiphany with requinto tuning, now it made sense. By then the "Tres Pinos" was pretty much unplayable and became a wall decoration. Later, a friend gave me a real nice requinto which I still play. Recently, I found an Erlewine "Chiquita" electric. This is a practice guitar designed by Billy Gibbons of ZZTop and Mark Erlewine (who maintains Willie Nelson's guitar). These were made at first in the US, then Korea, and now I don't know where. They are finished and set up in Austin.

The Chiquita is sometimes called the "Back To The Future" guitar because Michael J. Fox played one at the beginning of that movie. Here's some SUPER NERDY TRIVIA about that guitar. Unlike most Chiquitas, it lacks the string-gauge chart printed on the back of the headstock. Chiquitas have had at least three different bridge styles. This one looks like the strings-through-body design but we don't get a good look at the back of the guitar to be sure. Also, he plugs a stereo cable into the amp, but then he plugs a mono cable into the guitar. Huh.

Because of the short scale length, Chiquitas need heavy strings to hold standard tuning. Even then it's hard to keep in tune, and while the shorter scale reduces string tension, it feels weird to play. I was frustrated and disappointed. Then it occurred to me to tune it like a requinto with lighter strings. This worked out well. So there you have it, an electric guitar requinto tuned A E G C E A with string gauges, .10 .14 .18 .24 .38 .49. Every so often, you'll see solid body electric ukes with nylon strings but nylon strings don't rock. If you want an electric ukulele, try one of these.

See and hear a Chiquita with requinto tuning: